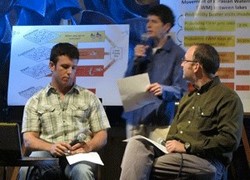 Ph.D student Alex Latzka (left) and social scientist Ben Beardmore (right), of the UW-Madison Center for Limnology, discuss the ecology and economics of AIS at a recent Science on Tap event at Minocqua Brewing Company. Discussion moderator Susan Knight is pictured in the background.


How valuable is a lake free of invasive species to you? What’s the value of a green frog or a loon? What are your habits as a boater, and how much do you know about invasives? Some scientists are working to find out.

Ben Beardmore, post doctorate social scientist at the Center for Limnology at UW-Madison, and Alex Latzka, a Ph.D. student,  study the interactions between aquatic ecosystems and humans. They talked about the ecology and economics of  aquatic invasive species at a recent Science on Tap event at Minocqua Brewing Company.

Beardmore said the Center for Limnology is examining Northwoods AIS issues from a social standpoint as part of their research. He recently took time share what their work here in the Northern Highlands Lake District entails.

It’s work that involves collecting a lot of data about water bodies and the people that use them.

The survey measures things like what property owners are willing to pay to treat Eurasian water milfoil (EWM), or prevent an invasion. Peoples’ perceptions on these issues are thusly revealed.

“It’s not to say that they’re actually willing to pay that much, but it gets to the issue of the felt loss of benefits that might be associated with an invasion,” Beardmore said.

“Other versions of the survey are looking at willingness to pay for different conservation values. One version of the survey looks at the benefit to property owners of maintaining loon populations on their lakes and another one looks at shoreline habitat conservation to conserve green frogs, which are a declining species in the north.”

Increasing shoreline development affects the habitat of the green frog, Beardmore said. The EWM studies were follow-ups to a survey conducted in 2008.

“What we want to do is update the values that came out of the previous study in order to see how things have changed,” Beardmore explained.

They seek to determine, for instance, if people on lakes with EWM are willing to pay more or less for control or prevention than they were a few years ago.

“Often, in economics, with these first valuation studies, you get a first snapshot, one-time value, and then that value goes forward in perpetuity, and very few actually follow up to see how those values might change over time,” Beardmore said.

Boaters and the spread of AIS

Analysis of boater surveys is also part of the Center for Limnology’s work. They talked to about 3,500 boaters overall. In 2011 and 2012, about 1,200 boaters kept diaries, or trip logs, over the course of a year. There were 125 boaters that kept logs for both years. Beardmore said analysis of that data is taking place now.

One part of the study looks at what boaters perceive to be the most important ecological issues for lakes in the Northern Highland.

But there’s a divergence among boaters when they reveal their perceptions on what they believe to be the top issue.

“Some boaters, it’s really declining fishing quality that is far and away the most important issue. For other boaters, it’s perceptions of lake pollutions that really define them, and others it’s over-development,” Beardmore said.

“The two issues that come out as most important overall, habit at conservation and aquatic invasive species, are actually second and third most important consistently across all boaters, but the number one boater issue really depends on the boater.”

Awareness of AIS was also assessed. Educational efforts in this realm apparently haven’t fallen on deaf ears, but Beardmore notes that more can be done.

“Boaters are very aware of aquatic invasive species,” Beardmore said. “The state and folks like Clean Boats Clean Waters have done a great job in terms of promoting awareness of the issue on the whole.

On average, boaters had been boating on their favorite lake for 17 years, Beardmore said.

“If they’re not aware that it’s invaded then they may be less likely to be quite as diligent when it comes to inspecting their boats and checking to see if any Eurasian water milfoil has come up,” he said.

“We hope to get that information out there and, hopefully, make a real difference in terms of slowing the spread of this stuff around.”

Beardmore said they’re also using the data from the trip logs to look at the probabilities that EWM is moving around to so-far unaffected lakes in the area. Crews of under grad students inspected almost 1,500 boats at lakes with EWM in 2010-11. EWM came off those boats in 46 instances.

“We were able to look at some of the patterns in the timing and locations of where people were boating,” Beardmore said. “If we look at the trips that go to one of these Eurasian water milfoil lakes, we can see that about a third of them then go to an uninvaded lake.”

EWM generally survives about 24-72 hours out of water. That one-third of boaters is going from a lake with EWM to one without go within a time that the EWM “might remain viable,” Beardmore said.

“By tracking through these various probabilities, frequencies of events happening, we’ve basically arrived at an average number of about a one in 1,000 chance of a boat coming off a Eurasian water milfoil lake, like Minocqua or Tomahawk or Nokomis, will end up bringing Eurasian water milfoil to a new lake that hasn’t been invaded.”

Beardmore noted that Minocqua, Tomahawk and Nokomis lakes each get over 10,000 boater visits per year, so each of them has the potential to bring 10 new introductions, meaning that as many as 30 new lakes could be affected, by these three lakes alone, each year.

Research into the likelihood that EWM will establish itself in a lake once it is introduced is taking place, Beardmore said.

“We’re also looking into refining that one in 1,000 figure to account for the fact that not all lakes are as popular as others,” he said.

Beardmore noted that an individual boater might prefer lakes similar to one another, increasing the likelihood that the next trip will be for a similar experience. Crunching such data could reveal which lakes are likely to be affected next.

UW researchers examining northern lakes work out of Trout Lake Station, a field station operated by the Center for Limnology at UW-Madison.

Science on Tap will be taking a hiatus for July and August, which are busy months for area scientists, but will be back on tap at Minocqua Brewing Company Sept. 4, with Volker Radeloff, professor of forest and wildlife ecology at UW-Madison.

Radeloff will discuss political and socioeconomic changes affecting landscapes in some of the world’s most remote, most beautiful and  most precarious environments. For more information, go online tohttp://www.scienceontapminocqua.org/.

Also, the public is invited to come learn more about what scientists are doing on our area lakes at the Trout Lake Station Open House. The open house is Friday,  Aug. 2, 1-5 p.m., at Trout Lake Station, 10810 County Highway N, Boulder Junction.  For more information, call 715-356-9494, or go to http://limnology.wisc.edu/.

Craig Turk may be reached at cturk@lakelandtimes.com.